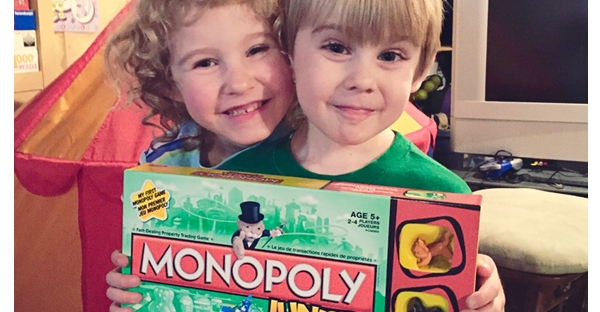 Today, we had “game night” except that it was actually 2pm. Details, details.

Last week I got an email from Influenster asking me to check my mail. On Friday, I opened my mailbox to find a copy of Monopoly Jr. courtesy of Hasbro. As part of their social media campaign, I’ve been asked to test out and review their product.

First thing I did? I yelled “Kids, we got something in the mail!” and let them open the box. They were pretty excited and didn’t even stop to ask why we got a board game in the mail. They were immediately drawn to the little plastic tokens. I agreed they could hold them but advised them not to lose the pieces. My daughter took the orange cat and black dog. My son took the blue boat and green car. I told them they’d have to wait until Sunday to play the game. 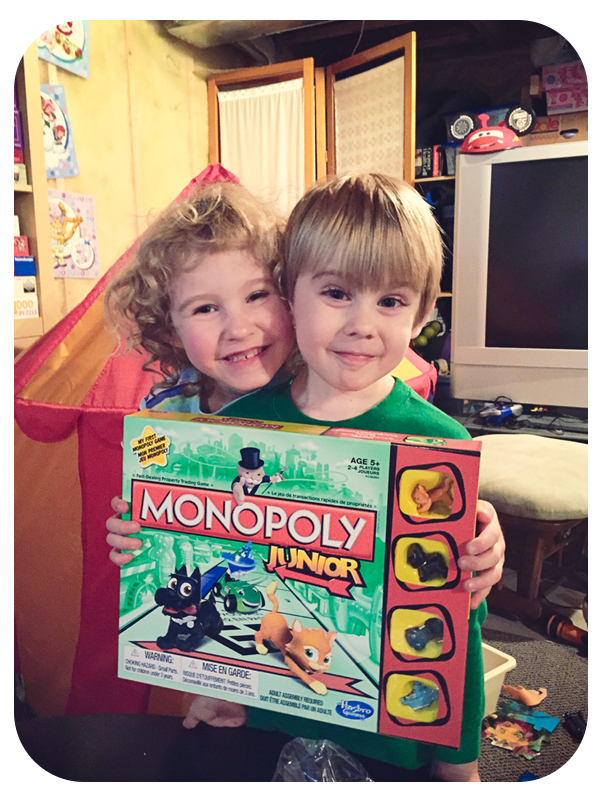 As promised, we set up the game today in our basement where we now keep all the toys and play area. It’s a work in progress. Or should I say “mess in progress”. Anyway, here is what I thought about the game.

1. As much as I love board games and playing with my kids, I have childhood memories of Monopoly being the neverending game. I had a moment of dread wondering just how long this game would take. I had meals to make.

2. When we opened the box, there were two sheets of cardboard with pictures of the token animals. Each had to be punched out. No problem for us, as my daughter was thrilled to do it. I opened the cards and placed them on the chance spot. I read the instructions but was distracted with questions from the kids. So, I missed the part that said the game starts by having everyone pick a card to determine which token piece they get. I hadn’t realized there were cards like that and had put them in with the chance cards. Which was just as well as the kids already knew which character token they wanted. Except my son had already lost the blue boat token. Oops! Later when playing the game, I picked up a chance card only to discover it was all in french. Again, I realized I hadn’t been careful and had put all the chance cards together. There was one pack of french and one of english. Oops! It was fine as my husband could read it. It pays to read your instructions carefully.

3. The board is a very simplified version of the regular Monopoly. The board itself is smaller. There are fewer properties. Every property is part of a colour pair and both properties have the same value.  The properties have fun names. When you buy a property, you place a cardboard piece with your token picture on it (ex. orange cat) at the top of the property. When you land on someone’s property, rent is the same cost as the purchase price. If they own both properties, you pay double. There are no utility spots. There is no community chest but there are chance cards. There are no houses or hotels.

I appreciated the simplicity as the kids were easily able to follow the rules. My kids are 4 and 6 and had no problems.

3. The game was engaging. Although, my daughter still had to get up every now and then to perform some dance steps and show us her socks. “Yes, I see your socks. Yes, they are ‘My Little Pony’. Yes, I like them. Please roll, it’s your turn.”

4. The truth? My kids were most interested in taking turns being the banker. I have no idea why that was so fascinating to them. My son was really proud of it. “See Mom, I am really good at this. I’m a good banker.”

5. Anything lacking in the game? My husband was concerned about the kids shifting the board and it being unclear which properties were owned by whom. I said that is pretty standard issue for any board game played by kids. He said it would be helpful if players were to hold onto property cards in addition to the little cardboard piece on the property, just in case the pieces were shifted. I agreed that would be better.

6. We didn’t quite make it to the end. The game was going pretty quickly but my son decided it was time to play another game and my daughter was dancing around a lot between turns, so my husband and I shared a glance that said “yup, that was good” and we finished up. I went to make supper and he played a different game with the kids.

All in all, I’d say that was a very successful game. We’ll definitely play it again and again. I think it is a great way to introduce your kids to Monopoly. I have a Coca Cola version, and a Rudolph version of Monopoly that I hope to play when the kids are older. Until then, I think we’ll get a lot of use out of this one.

Thanks Hasbro! Thanks Influenster!

Support Me at ko-fi!

Where to Find Me:

I was published in: